Christopher Penczak presents: The Vision of the Eve of the Prophet 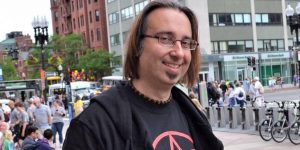 Hosted by Pathways and the Temple of Witchcraft

Tickets available on Eventbrite at:

Experience a different celebration of the Summer Solstice season. At this time many traditions celebrate St. John’s Eve, the birthday of John the Baptist by going down to the river for a blessing by water. John was the wild man, living outside of societal norms, living off of honey and locusts and sharing what appeared to be crazy visions. In esoteric Christian lore, the Nazarene is forced to take both roles of the sacred king and prophet, Sovereign and Seer, with the death of John the Baptist, beheaded at the request of Herod’s step-daughter, Salome.

Through this death, John enters the occult lineage of prophetic sacred heads, including Bran the Blessed, Mimir, the Green Knight, and Orpheus. The name of her mother Herodias, is later associated with the wild hunt, Witchcraft and the figures of Diana and Aradia.

Herodias becomes an archetype for the first Witch. While St. John’s Eve celebrates the birth of John, to balance the birth of Christ at the Winter Solstice, evoking an oak king and holly king kind of symmetry, the blooming of St. John’s Wort at this solstice time evokes the spirit of death. With solar yellow flowers making blood red medicine that can heal trauma and ward off evil spirits, we seek the flowing vision of the prophet, seeing the future and pouring out the waters of spirit, like the cup bearer of Aquarius.

The prophet and the severed head is not just a Christian tale, but one that repeats over and over again. How do we see it take shape in the new aeon? Seek out the wild vision, the flowing river, the blessed water and the blessed blood that heals.

Our session will include a lecture on these esoteric ideas, and a short moderated Q&A session followed by a visionary working into the Mysteries of St. John’s Eve, the Night of the Prophet. You can use this material to deepen your own personal Midsummer’s rituals at home this year, and support local community. $25